Since 2012 Maike Aden has been working on the reorganisation, documentation and representation of the archive of the publishing house Guy Schraenen Éditeur.

Since the death of Guy Schraenen in 2018, she takes care of his estate.

“FOR ANOTHER APPROACH TO ART HISTORY”

Guy Schraenen (1941–2018) was a gallery owner, publisher, collector, curator, investigator, author. He is probably best known as one of the key figures of a transboundary network of pioneering artists and activists who, from the end of the 1950s on, explored and promoted radical new languages and ways of producing, multiplying, and disseminating artistic ideas and works. Investigating in new formats, materials and concepts, they exceeded the art-immanent circuit with its defined discourses, rituals and rules. Long before established art institutions, critics, and art historians recognized the artistic value of this then new genre of artists' publications, Guy Schraenen treasured, published, exchanged, collected, and presented it to give “the opportunity to a public, kept ignorant by specialized media, to have knowledge” (Manifest A.S.P.C., 1974).  The exhibition seeks to illustrate Guy Schraenen's various projects, approaches, and connections, starting with his exhibition projects as founder of the Galerie Kontakt. It displays works and documents of his publishing house, Guy Schraenen éditeur, which he founded to explore new paths by publishing works in collaboration with artists. His active participation in the global art exchange network and his efforts to preserve independent artistic creations led to the founding of the Archive for Small Press and Communication (A.S.P.C.), which he ran with Anne Marsily. The exhibition also reflects on his interest in promoting awareness of new art practices by organizing exhibitions, performances, screenings, concerts, essays and radio programs, both as an individual and in collaboration with institutions. From the end of the 1980s on, he was invited by several European museums to found, curate, and present collections of artists’ publications. Guy Schraenen’s distinctive work was underpinned by his deep concern to take an independent stance toward the canons of the established art system and to explore territory beyond the mainstream, including beyond the mainstream of the anti-mainstream. With the works presented in this exhibition, we have the chance to witness the free-spiritedness of him.

The exhibition is organised by the Museo Reina Sofía Madrid within the program of the Library and Documentation Centre and curated by Maike Aden.

The homage with interventions and a life-perfomance is organised by the Museo Reina Sofía Madrid within the program Documentos.

The lecture will reflect on the various activities of Guy Schraenen as publisher, essayist, curator and advisor in the field of artists’ publications: his Galerie Kontakt, his publishing house Guy Schraenen Éditeur, his Archive for Small Press & Communication (A.S.P.C.), his radio programs such as I am an Artist or Freiheit zum Klange (Freedom to sound) his initiative of founding the museum collection of artists' publications A Museum within a Museum (a.o.) and his exhibition projects in various European museums. 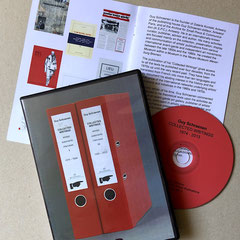 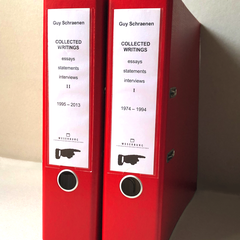 The publication of Guy Schraenen’s “Collected Writings” give access to all the texts he has published over four decades, from the 1970s up until the very recent past. They document his abiding interest in the history and the significance of the international networks underlying artists’ publications and initiatives in the 1960s and 1970s. He reflects upon the socio-political and cultural strategies of the artist-initiated art scene, which remained independent of the official art establishment.

The writings are presented in the form of facsimiles of the original publications. Most texts are in English, some in French, several also in other languages. They are available in two versions:

ONLINE NOW!
WEBSITE GUY SCHRAENEN ÉDITEUR. ARTISTS' PUBLICATIONS  >IN AND OUT OF PRINT<

In the course of the new exploration, documentation and presentation of the archive of the publishing house Guy Schraenen Éditeur, I created a website which is online now. It includes the complete lists with descriptions and photos of the original artists' publications in limited edition by Guy Schraenen Éditeur and of documents and catalogues by the Archive for Small Press & Communication (A.S.P.C.). Presented are the artists’ books, magazines, publication collections, assemblings, postcards, graphics and catalogues, as well as multiples, sound works, film and video recordings etc. Accessible is also a broad selection of ephemera on exhibitions and projects by Guy Schraenen in his Galerie Kontakt, his Archive Space and in many other international venues he collaborated with.

REORGANIZATION, DOCUMENTATION AND REPRESENTATION OF THE ARCHIVE OF THE PUBLISHING HOUSE GUY SCHRAENEN ÉDITEUR

Since 2012, Maike Aden has been working on the reorganisation, documentation and representation of the archive of the publishing house Guy Schraenen Éditeur (Antwerp/Paris) which was founded in 1973 and ran until 1978. It comprises all aspects and forms of artists' publications, not only printed matter such as books, newspapers, magazines, postcards, catalogues, posters and photos by artists, but also objects as well as video and film and a very particular commitment to sound art. Included are the published art works by artists such as Ulises Carrión, Lourdes Castro, Henri Chopin, Degottex, Mirtha Dermisache, Peter Downsbrough, François Dufrêne, Françoise Janicot, Brion Gysin, Bernard Villers and many others.